Call Me By Your Name directed by Luca Guadagnino (USA) 2017 begins with the arrival of a summer intern in Northern Italy in 1983. 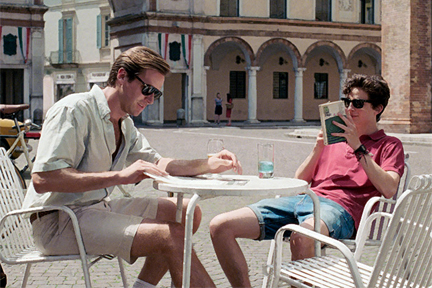 Each year a Greco-Roman culture professor invites a grad student to help him with his research. This year it’s a tall, striking grad student named Oliver, who immediately captures the attention of the professor’s teenage son, Timothée.

Much of the film, and the novel by André Aciman it’s based on, is about the prolonged longing and unfulfilled physical contact of the two young men.

I put aside the book after reading perhaps the first third but the film held my interest from beginning to end.

Call Me By Your Name is now playing at The Landmark, Los Angeles and Paris Theatre, New York.