Harvey Milk: His Lives And Death by Lillian Faderman. (2018) Yale University Press is a concise, well-written biography. A more satisfying work than either the Randy Shilts book or the Gus Van Sant feature film. 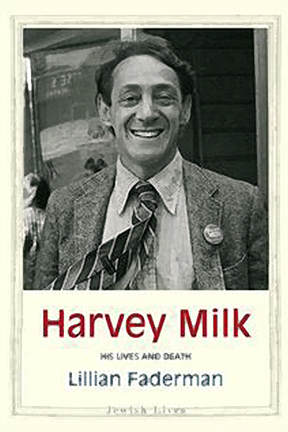 Faderman’s book chronologically follows each phase of Milk’s life beginning with his childhood in an upper middle-class Jewish family on Long Island.

Intergenerational differences and conflict are there at the very start and remain as unresolved elements throughout his life.

Milk’s realization that he wasn’t quite like other boys and young men was a factor he dealt with in numerous ways. Homosexuality was almost universally condemned when he first realized he was gay. It was one of several important aspects that defined who he was and how he related to the world around him.

He tried various approaches in pursuit of a career he hoped would bring an overall sense of purpose in his life before settling on the one that was most challenging, satisfying numerous parts of himself, and leading eventually to his tragic death.

Harvey Milk is Lillian Faderman at her best and a valuable resource of LGBT history alongside her previous hefty publication, The Gay Revolution (2015) Simon And Schuster.